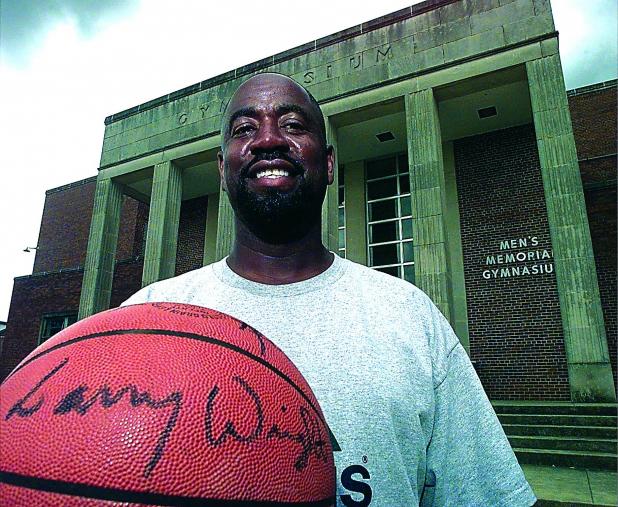 No matter where he played, from Richwood High School to Grambling and into professional ball, Wright was always part of teams that won big.

“Winning has always been number one for me since I can remember starting to play at an early age,” Wright said. “Even as a small kid going to the rec center, winning was always the number one deal with me.”

Wright was a two-time Parade Magazine All-American at Richwood and won a Class 3A state championship in 1972.  He transferred to Western High School in Washington D.C. as a senior and his team won the city championship. Grambling won the 1976 SWAC tournament championship with Wright starring as the conference player of the year.

Drafted in the first round by the Washington Bullets in 1976, Wright joined the franchise that won the NBA championship in 1978.

Wright finished his playing days as an international star, delivering a European Championship for Italy’s Banco DiRoma in 1983-84.

For all of his accomplishments, Wright has finally earned induction into the Louisiana Sports Hall of Fame as part of the Class of 2018. He and 10 others will be enshrined at the annual induction dinner and ceremony at the Natchitoches Events Center on Saturday, June 30.

“He’s had a storybook life,” said son-in-law Damon West, who is head coach at Rayville High School. “You’ve just have to put the pieces together.”

Important people along the way shared Wright’s story, starting with his mother Recie Hollis. He watched as she worked multiple jobs to provide for her family. Larry Wright was the sixth of nine children.

“I wanted to do my best to be a winner,” Wright said. “It comes from seeing my mother raise nine kids by herself. Seeing her get up going to work every day and never complain about anything. She always told us that if we were going to do something, do it your very best.

“She never allowed us to come home and complain about anything. I think I get that from Mother. Watching my older brothers play football at the powerhouse, Richwood High School. I used to go to practice with them and watch them. I went to games and watched football games. Once upon a time, Richwood won 66 in a row under the legendary Mackie Freeze.”

At Richwood, another important figure entered his life. Hershell West, the man who would become his high school coach and mentor, spotted Wright in the gym when he was in junior high.

“I first saw him as an eighth grader,” West said. “He was a small player but a competitor. He was just a winner.”

Wright said West encouraged him to pursue excellence in basketball in a way no one ever had before.

“Nobody ever showed interest in me the way he did,” Wright said. “He saw me play and he said to me that if worked at it, I could end up going to college on scholarship.”

West, who had been a great player himself at Grambling, told Wright that he had a future in basketball if he would put in the work.

“Nobody had ever said anything that encouraging to me,” Wright said. “After he said he said that to me, I’d make a daily visit to his class so he could talk to me about the game of basketball. I was like a sponge. Whatever he said, I would listen at it.”

Wright became vocal about his goals, which included earning a college scholarship and reaching the NBA.

“I remember one day in ninth grade, I told him I’d make it to the NBA,” Wright said. “He said if I believed it, I could do it. Never from that day until I went to the NBA did I put a basketball down.”

Wright suffered a broken arm in 10th grade and Richwood lost in the playoffs but he came back with a vengeance in his junior year as he averaged 28.9 points per game. At Richwood, Wright paired with Louisiana Sports Hall of Famer Sammie White in a dynamic backcourt. White went on to play wide receiver for the Minnesota Vikings in the NFL.

“I still believe to this day, we were the best pair of guards to play in the backcourt in north Louisiana history and probably in state of Louisiana,” Wright said.  “In 1972 we won the state championship. I think we were 35-1.

“We lost one game and it was on a controversial call where one guy called the basket good and the other guy called it no good, to Jonesboro in Jonesboro. Never forget, we were all in the dressing room with our heads down crying. Hershell said, ‘We’ll get them again at the end of the year.’ We got ‘em again and made good. We went on to Alexandria and no game was close.”

When Wright learned that he wouldn’t be eligible to play a full senior season at Richwood because he was turning 18 in November, West arranged for him to move to Washington to play for future Grambling athletics director Robert Piper at Western High.  West and Piper were close friends and former teammates at Eula Britton High in Rayville and at Grambling.

“They ruled against me and said I’d only be able to play the first semester in high school,” Wright said. “Again Hershell West stepped in and called Robert Piper. It wasn’t a semester situation. It was an age situation.”

Another Louisiana Hall of Famer, Grambling football legend Ernie Ladd, put Wright on a plane to Washington as he left the state of Louisiana for the first time in his life.

Grambling’s legendary coach Fred Hobdy promised Wright a scholarship when he was in10th grade and that offer stood two years later. Wright, who wanted to follow in the footsteps of West and Piper, turned down other college opportunities to play for the Tigers.

“I could have gone to any school in the country,” Wright said. “But Mr. West went to Grambling, so I wanted to go to Grambling.”

Wright enjoyed three great years at Grambling  and was two-time selection to the NCAA all-small colleges team. Wright was the SWAC Player of the Year as a junior with a 25.4 scoring average for the Tigers’ SWAC Tournament championship team.

“He was very unique,” Wright said of Hobdy. “You go to Grambling, you’ve got to go to class and get an education. Basketball was secondary. The second thing that was unique about him is that he was an outstanding fundamental coach. He got you ready for every aspect or facet of the game.”

Wright declared for the NBA Draft as a hardship case and was a first-round pick at 14th overall by Washington.

“Larry is one of the best small players I ever scouted,” general manager Bob Ferry noted in the 1977-78 Bullets media guide.

Describing Wright’s style in their 1977-78 preseason scouting report, the Bullets noted: “He loves to play, isn’t afraid of anything. Best example of his fearlessness. He saw Boston Garden for the first time on Nov. 5. It was the Celtics first home game, they passed out championship rings, raised all the flags. Larry came off the bench, scored 23 points, including six for six from the foul line in the final 28 seconds.”

“Larry and I accomplished one of the great accomplishments in sports,” Hayes said. “We were with the Washington Bullets and had a great team. Larry was a part of our championship.”

Hayes, another Rayville native, had crossed paths with Wright before.

“I met him one time when I was in high school at Richwood,” Wright said. “He was with the San Diego Rockets. Coach West brought him to Richwood. He played against us and talked to us about being a player. It’s unreal the way it happened. One day I would win a championship with Elvin Hayes.”

Wright and the Bullets battled through the playoffs.

“We were down to the San Antonio Spurs three games to one,” said Wright who celebrated the 40th anniversary of their championship with a reunion back in Washington in 2018. “I’ll never forget, Dick Motta made the statement that ‘the opera’s not over until the fat lady sings.’ We heard him when he said it. We knew we were a good team. We came back and eventually won the whole thing.”

After playing six seasons in the NBA with the Bullets and Detroit Pistons, then spending a year away from basketball teaching in Monroe, Wright had a chance to return to the court in Europe.

The Italian team Banco DiRoma wanted an American player who could help them take down the team led by star Mike D’Antoni, now head coach of the Houston Rockets.

“Larry was an offensive guard, a natural born scorer, a fighter,” Italian coach Valerio Bianchini said in a 2013 interview with Euroleague.net. “He was not a pure point guard, but a mix of point and shooting guard and that only made his potential higher. His fighting character came from his difficult childhood, marked by family poverty. He was a very responsible man and he always cared a lot for his family and helped them a lot.”

“It was really something that as a boy growing up in Louisiana, I never thought about the opportunity to go to college on a basketball scholarship, then get drafted in the first round of the NBA, win a world championship, then go to Rome Italy and win a championship where they hadn’t won in 40 years.”

After ending his playing days, Wright would work as an NBA scout, then return to Grambling as head coach before becoming a high school administrator.

Though those years, he won in his role as a father too. Wright’s family had the right stuff when it came to sports.

“I’ve got the greatest kids,” Wright said. “Some special kids.”

In a wonderful new chapter to his story, Rayville High School, where Wright serves as an assistant principal, went undefeated in 2017-18 and won a state championship. The Hornets are coached by Damon West, Hershell’s nephew and Wright’s son-in-law. West employed the same up-tempo attack at Rayville that Hershell West and Hobdy ran when they were coaching.

“He’s played the game on every level and won on every level,” Damon West said. “There are a lot of things we talk about and he’s been through it. That’s been a real plus for me.”

For Wright, his Rayville connection just brought everything full circle -- in the same year he enters the Louisiana Sports Hall of Fame.

“All the people responsible for me being who I am were people from Rayville,” Wright said. “When I was offered the job as social principal at Rayville High School, it was a no-brainer. It came full circle. People like Hershell West and Robert Piper put me under their wings and helped me become the man I am today. I wanted to come to Rayville to see if I could help somebody.”