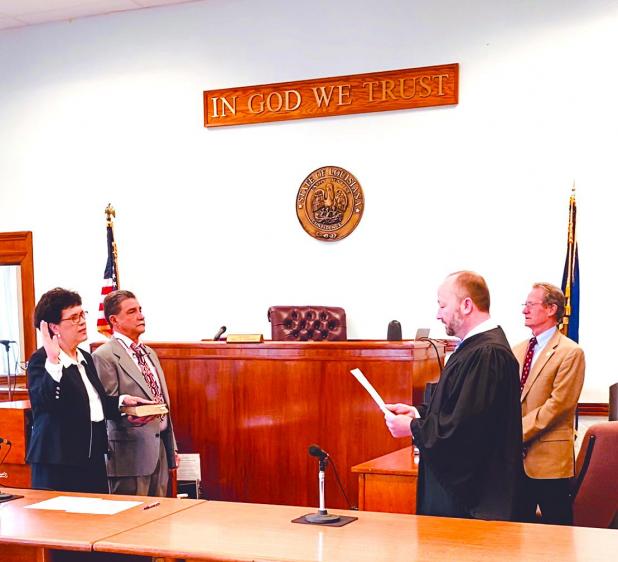 Penny Douciere is sworn in as district attorney for the Fifth Judicial District by Judge Will Barham.

Penny Wise Douciere was sworn in as district attorney for the Fifth Judicial District March 31 by the Honorable Judge William Barham.

She will serve out the remainder of the term left by retiring District Attorney John M. "Mack" Lancaster.

Douciere has been an Assistant District Attorney for  more than 30 years, serving in Richland Parish as both a misdemeanor and felony prosecutor on cases ranging from simple battery to first degree murder. Douciere handled all appellate and post conviction relief work on behalf of the State of Louisiana for Richland, Franklin and West Carroll Parishes.

Recently, she represented the State of Louisiana in Department of Children and Family Services cases for the collection of child support throughout the district, and has served as the First Assistant District Attorney during Lancaster's term.

Douciere is the wife of Dr. Richard F. Douciere and the mother of Dr. Emily Robertson (husband, Lane) and Andy Douciere. She graduated from Louisiana Tech University in 1982 with a bachelor's degree in business administration and from the LSU Law School in 1985. After graduation, she worked as a law clerk in the Third Judicial District prior to moving to Rayville to work at the Cooper, Hales Law Firm.