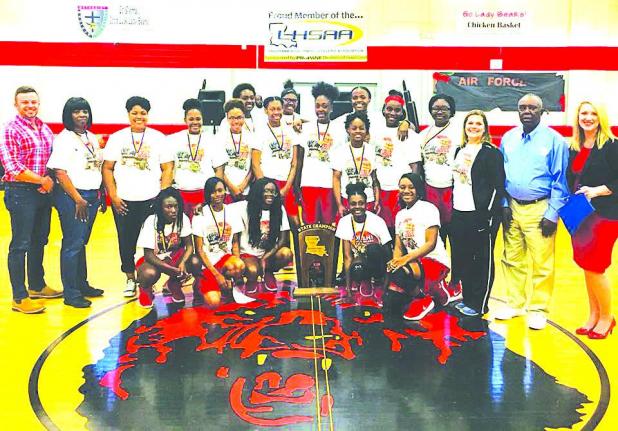 The Richland Parish Chamber of Commerce hosted a community event April 11 in the gymnasium at Delhi High School to celebrate the Delhi Girls Basketball State Championship and help raise money for their championship rings. The Delhi Bears raised nearly $1,900 during the event.

The Richland Parish Chamber of Commerce hosted a community event April 11 in the gymnasium at Delhi High School to celebrate the Delhi Girls Basketball State Championship and help raise money for their championship rings.

“The support from the community and town leaders in Delhi was overwhelming. We thought we would pass flyers out to help spread the word about the event. Everyone we spoke to already had plans to attend. Mayor Washington said he had already been the bank and was ready to donate,” says Richland Chamber Board Member Chelsea Higginbotham.

The beginning of the event started out like any normal pep rally with cheerleaders rooting on their team. This was not just any pep rally. Luke Letlow, Richland Parish Chamber Board Member and Chief of Staff at the U.S. House of Representatives, presented Coach Anderson with an American Flag that had been flown over the Capital in Washington D.C. just for them.

Coach Anderson announced each player as they ran a victory lap around their gym. Once the players were in their place, Coach Anderson advised them not to sit. She had a surprise in store.

When the Delhi Fire Department walked in with a ladder and pair of scissors, the 2018 Delhi Girls Championship Basketball team knew what was in store for them. As “All I Do Is Win” played on the speakers, Coach Anderson led the girls in cutting one piece of net at a time down. The atmosphere was pure excitement. The players had a seat after setting up a new net and community members had an opportunity to have championship photos autographed.

The Richland Parish Sheriff’s Office served hot dogs donated by Delhi Brookshire’s. All in attendance had an opportunity to challenge a player of their choice by making a donation. The Delhi Bears raised nearly $1,900.