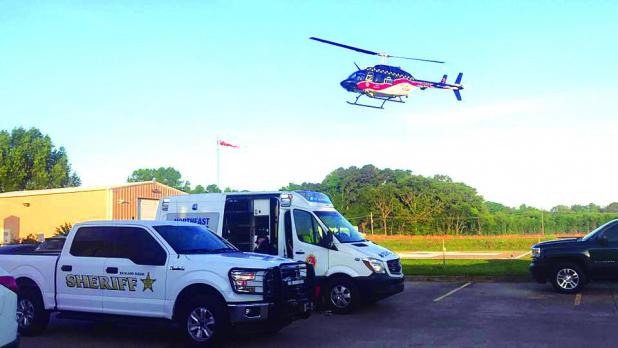 Northeast Louisiana Ambulance and AirEvac of Rayville are shown working to airlift a patient from a serious crash on Saturday. The ambulance service urges motorists to ensure all occupants are properly restrained. Wearing your seat belt will dramatically reduce your chance of being injured or killed in a crash. While not all crashes are survivable, seat belts can greatly decrease the occupant’s chance of death and will greatly reduce the extent of injury.

Troopers from Louisiana State Police Troop F began investigating a fatal crash on LA Hwy 183 just north of LA Hwy 854 which took the life of an unrestrained child on May 25.

The initial investigation by State Police revealed that the crash occurred as a 2007 Chevrolet Impala, driven by 21-year-old Darren Moore of Horn Lake, Miss., was traveling south on LA Hwy 183. For reasons still under investigation, the Impala traveled off the road into a ditch and collided with a culvert.

Moore, who was properly restrained, was airlifted to Jackson for injuries he sustained in the crash.  Tekerra Moore, a 4-year-old passenger, was unrestrained and pronounced dead at the scene by the Richland Parish Coroner’s Office.

A toxicology sample was obtained and submitted for analysis. This crash remains under investigation.

Troopers wish to remind everyone that children depend on adults to insure they are properly restrained in an age and weight appropriate seat. While not all crashes are survivable, statistics show that the chances of surviving a crash rise significantly when properly restrained. Making good choices while in motor vehicles such as never driving while impaired, always ensuring every occupant is properly restrained, and avoiding all distractions can often mean the difference between life and death.

In 2019, Troop F has investigated 16 fatal crashes resulting in 21 deaths.