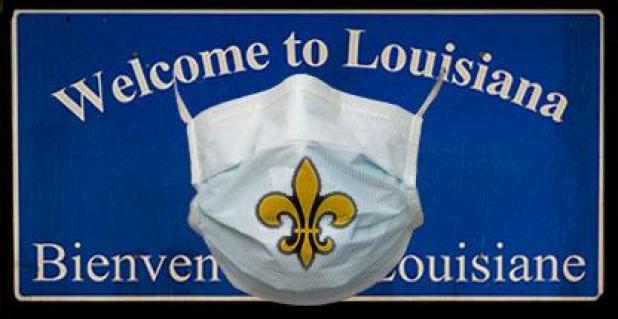 On the day New York Mayor Bill DeBlasio called for a national draft of retired doctors and medical workers to be rushed to New York City, Louisiana COVID-19 cases broke above 10,000 to 10,297 cases. That's up by 1,147 new cases but that number represents half the increase seen Thursday which set a record 2,726 new cases. Governor John Bel Edwards said in his Friday press conference that's due in large part because Louisiana now ranks second in the nation for testing per capita. But more concerning, he says, is that Louisiana suffered 60 additional deaths in one day, bringing the total to 370 in 3 weeks.
"What we're seeing is looking like what we're going to see as the daily normal going forward," said Governor John Bel Edwards in his Friday press conference, "though the 13 percent increase is more in line than the 42 percent increase we saw Thursday. We are engaged in a marathon, not a sprint. I urge Louisianans to take the stay-at-home mandate seriously. We and we alone will determine just how bad the Coronavirus gets. Your neighbor's life depends on it and, quite frankly, so might your own.
"And I suspect we will continue to have a higher death rate per capita than the rest of the nation because we have underlying problems in a higher proportion of our population, mostly diabetes, obesity, kidney and heart disease."
Edwards expects a surge of COVID-19 patients next week that may overwhelm hospitals and, through the State Board of Medical Examiners, is asking retired physicians and medical staff who still have certifications to consider reentering healthcare. New York Mayor DeBlasio wants the federal government to institute an outright draft of retired doctors, surgeons, and nurses back into service to head off what he terms a juggernaut health crisis in his city. "We need 45,000 more medical personnel," said DeBlasio Friday and wants them pulled from all over the country.
"As much as I love New York," Governor Edwards replied, "I am not interested in having our medical professionals drafted and sent to New York because we know we have real problems here in Louisiana in the not-too-distant future with respect to our capacity to deliver healthcare. That's our problem in the [2,000-bed] standup hospital we're building in the Morial Convention Center in New Orleans. You still have to staff it."
Retired Chief Medical Officer of Baton Rouge's Our Lady of the Lake Medical Center, Dr. Ron Radzikowski, 80-years-old, says drafting retired physicians will be difficult for several reasons. "I'm not afraid of dying and would love to jump in on Coronavirus," he says, "but my certification lapsed years ago and I wouldn't begin to know current procedures, medicines or dosages. Our creed is 'to do no harm' and I'm afraid I might harm someone in the rush of this crisis." Radzikowski practiced medicine from 1975 to 1995 before advancing to the administration of OLOL. He retired in 2008. "I guess I could re-learn but you don't want somebody training-on-the-job on you if you're sick."
Projections from the Louisiana Department of Health expect hospitalizations just in New Orleans will not peak until early May, a time when 2,500 new COVID patients per day will inundate healthcare facilities. The state is already running low on ventilators, "and without ventilators, some patients will die," Edwards said.