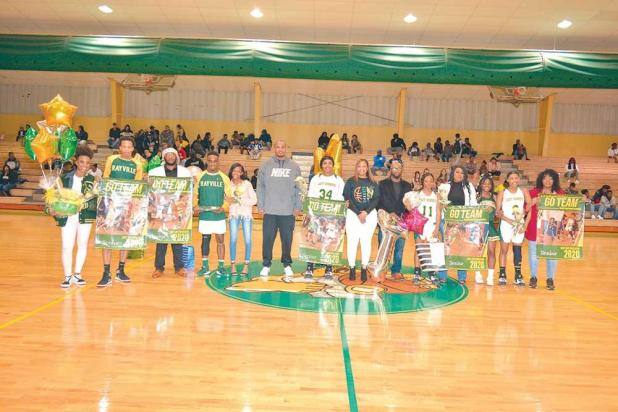 Lady Hornets only lose one in district

As expected the Rayville High School Hornet Girls with two final wins went through district with only one loss which they covered with a vengeance in a rematch.

They took care of General Trass in Rayville 60-15 as Jalexis Kelly went on a tear scoring 28 points.  Amari West dropped in 11, Tamayah Miller added six as Samiyah Smith and Lane Wood contributed four each, Briyonnah Hendrix scored three and Jalecia Miller and Ashanti Hunter got two each. You may have noticed the Lady Hornets take turns being high scorer. That’s because that had just soon make an assist as to score.

That left Vidalia at their place whom we had beaten by 18 on January  21. So, no problem right? Wrong.

Whether it was the easy game the night before or playing  in Vidalia there was a difference.  Half way through the fist quarter they had us 1-8.

At 3:39 in the third quarter Jalecia Miller hit a basket and converted the free throw to give the Lady Hornets a 29-27 lead that they never relinquished. They went on to win 80-49.

The Lady Hornets had to forfeit some games because of confused paperwork on one of the players.   So they dropped in power ranking from 7 to 11. This cost them the possibility of a second round home game.

They will meet #22 seed  D’Arbonne Woods Charter Feb. 20.  Come on out.  This may be the last home game of the season.

Not much to say about these games except who scored what.

Scoring in the second will remain a mystery as I lost the score sheets.

I can tell you this. Late in the fourth quarter with the score with score 106-28 Jay Pleasant  crammed one of his patented dunks for a score.

Immediately there was a Hornet steal deep in Hornet territory.  There was Jay at mid-court as he took the pass.  No one between him and the goal.  He had just dunked one.

That was when time almost stopped.  It seemed in slow motion as you could see him thinking.  Gotta top the last dump.  As he got halfway to the basket around the free throw line, he made a daring pass to himself off the backboard. Baam!!!  He grasped the ball and had a rama-dama dunk, sis boon-baa!!.

It was show-time in Vidalia  on a Friday night.  Sorry you missed it.

Don’t miss the first playoff game here in Rayville.  Opponent will be announced next week.