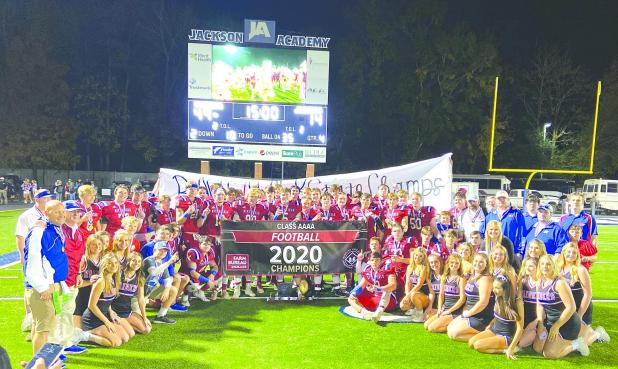 Raiders make history with back to back titles

The Riverfield Raiders completed their 2020 football season this past Friday afternoon in Jackson, Miss.

The game was the MAIS-4A championship game in which the Raiders entered into very well prepared and ready to take the victory.

The Raiders outscored their opponent, the Wayne Jaguars, in the game, seven touchdowns to two for a final score of 49-14.

The first quarter was scoreless but from the beginning of quarter two, the Raiders, began a dominance of the game which opened up a powerful rushing attack that the Jaguars just could not contain. The rushing duo of Trent Ginn and Hudson Brakefield which has fueled the Raider offense all season long proved to be more than enough in the big game. The Raiders tallied up 450 yards of rushing in the game while only gaining 23 yards passing.

Brakefield, who cashed in with 248 yards rushing, scored two of the seven touchdowns. Ginn who tallied out at 186 yards, scored five touchdowns. Brett Whorten and Bailyn Sorensen, added seven and 13 yards respectively to the rushing total. Ginn was two for three in the passing game connecting once to Kayden Giesbriect and once to Barnes Williamson.

Wayne, who gained more of their yardage in the air than on the ground, were well contained all night long by a tough and well prepared Raider defense, a unit, that has been very strong all year long. The defense held Wayne to 177 total yards and two touch downs on the night.

The win, Friday night, was significant for the Raiders in several different ways. First of all, it was the second year in row that the Raiders have won the MAIS-4A Championship. Never before in school history have the Raiders won a championship two years in a row. Also, the Raiders were kind of handicapped in their early season due to state Covid regulations. They could not play home games for the first few weeks thus they had to play more away game than normal.

The challenges and handicaps of the 2020 season were not enough to disappoint a Raider team which was, extremely big in heart.

Congratulations to a team who played all season long with a heart to win and make it all the way to the top. Also thanks to the coaches, spirit groups and sponsors and as always the Raider fans who believed in this team to make school history.